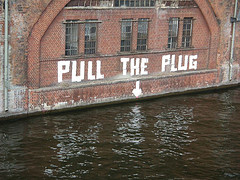 Although Voluven is likely “safer” than older HES products, it still is NOT safer than traditional volume repletion with normal saline or albumin.  It was a good run, Voluven, but it’s time to pull the plug.

Voluven is safer than older HES products.  Specifically, Voluven’s lower molecular weight and degree of substitution seems to confer a lower risk of coagulopathy and renal impairment.1  Because all HES products are NOT created equal, the medical community has been forced to wait for Voluven-specific trials to determine its role in volume repletion.

In theory, Voluven and other HES products are attractive compared to albumin because they are fully synthetic (not derived from human plasma) — thus, they can be manufactured at lower costs and do not have the theoretical risk of disease transmission.

Despite high-quality comparative data between albumin and Voluven, we do know that Voluven causes an apparent coagulopathy (eg, increased PTT or TEG findings) compared to albumin, but it isn’t clear whether this translates into hard clinical endpoints.2

A History of Fraudulent Data

Nothing can destroy a drug’s reputation quicker than fraudulent trial data.  One major author of numerous Voluven (and other HES product) trials, Joachim Boldt, has had many of his articles retracted due to data falsification and lack of IRB approval.  You can read the full story in all of its glory here.

Joachim Boldt’s disgusting actions have had dramatic effects — not only did it change public opinion regarding the “favorable” safety of Voluven, but many of his fraudulent trials were even included in a large meta-analysis.  The take-home point?  When examining the Voluven data, be very careful with the source of the data.

The 6S trial was one of the first high-quality, large trials examining the use of a low molecular weight, low substitution HES product.3  Although 6S used Tetraspan (6% HES 130/0.42) and not Voluven (6% HES 130/0.4), the products are extremely similar.

In this trial, patients with severe sepsis were given either lactated ringer’s or Tetraspan (max 33 mL/kg/day).  At 90-days, Tetraspan patients had higher mortality (51% vs. 43%, p=0.03) and required more renal replacement therapy (22% vs. 16%, p=0.04).  The conclusion was clear: Tetraspan (a product that is very similar to Voluven) increased mortality and renal failure.

The CHEST Trial with Voluven (Myburgh 2012)

There was a big to-do when the 6S trial was published because of the confusion between HES 130/0.4 (Voluven) and 130/0.42 (Tetraspan).  Unfortunately for Voluven, its time in the spotlight was only months away in the same journal.

Is Voluven Really Cheaper than Albumin?

The CHEST trial was modeled after the SAFE trial, which compared albumin to normal saline.  In both trials, the investigator was blinded to the treatment — thus, it is possible to compare the clinical “potency” between the two agents based on how frequently patients needed additional doses.

The biggest theoretical benefit of Voluven (cost) quickly comes into question when you consider that it may not be as potent as albumin on an mL-per-mL basis and the fact that hemodialysis is required more often with Voluven.

At this point, is there any reason to consider using Voluven at all?  It definitely causes more renal injury (including a need for hemodialysis), is unlikely to be as potent as albumin, may cause coagulopathy, and is unlikely to have a true cost benefit.  Potentially most concerning, a very similar product (Tetraspan) was shown to INCREASE mortality among patients with septic shock.

With all of that said: Fresenius Kabi — it’s time to pull the plug and voluntarily withdraw Voluven from the market.