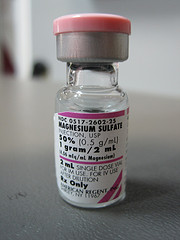 Magnesium repletion is very common in hospitalized patients.  Is there any difference between PO and IV magnesium in patients without symptoms of hypomagnesemia?

There are a lot of magnesium-based dosage forms approved in the United States.  Two of the most common are magnesium sulfate (IV) and magnesium oxide (PO):

As you can see, a “typical” dose of magnesium sulfate and magnesium oxide contain similar amounts of elemental magnesium.  Of course, because magnesium oxide is taken orally, bioavailability must be considered.  One must also consider a potential for diarrhea with oral magnesium, particularly given that oral magnesium is actually used for constipation in some OTC products (eg, magnesium citrate laxative).

There is a retrospective chart review comparing oral and intravenous magnesium therapy, although the article has some significant limitations for clinical applicability.1

This study compared varying doses of oral magnesium oxide (800-1600 mg, N=164) to a single dose of IV magnesium sulfate (2 gm, N=188).  As would be anticipated, the baseline characteristics were very different between the two groups.  The oral magnesium group received about three times the dose of elemental magnesium (1130 mg vs. 400 mg), had higher baseline magnesium levels (1.78 vs. 1.64 mg/dL), and had repeat serum levels drawn much earlier following magnesium replacement (8.25 vs. 18 hrs).

The primary endpoint of the study (change in serum magnesium level after 6 to 24 hours) was greater with IV therapy than any dose of oral therapy (mean change 0.24 mg/dL vs. 0.05-0.11 mg/dL, p=0.003).  Linear regression showed that the following factors were significantly associated with a greater change in magnesium level:

Putting It Into Perspective

Despite the limitations of the previously mentioned study, it does demonstrate some interesting points about magnesium replacement:

6 thoughts on “What’s the difference between oral and IV magnesium replacement?”