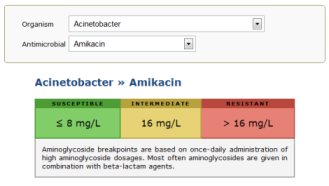 MIC breakpoints for antimicrobials are not easy to look up — until now.

CLSI, the governing body in the United States for breakpoints, hides their data behind a $250+ book called M100.  For clinicians who do not work in a microbiology lab or have access to the M100 book, it is difficult to find published breakpoints for antimicrobial agents.

Fortunately, the European version of CLSI (called EUCAST), has the opposite approach.  Not only does EUCAST publish their breakpoints online, they also have an incredible database of MIC distributions.  It’s unfortunate that CLSI has such a closed approach compared to EUCAST.

For clinicians wanting to find the EUCAST MIC breakpoint for an organism/drug pair, a new tool has been released: the ClinCalc EUCAST MIC Breakpoint Tables.  This website is directly based on the 2012 EUCAST breakpoints for both bacteria and fungi, and like EUCAST, is freely available.